In the middle of the COVID-19 pandemic, the U.S. Department of Labor hit the pause button on pandemic concerns and returned at least for a moment to the good old fashioned F-M-L-A.

This morning, the DOL issued new model notices and forms to be used by employers in the administration of the FMLA. The notices… Those sneaky little rascals! While the rest of us were enjoying our Memorial Day holiday, those crazy kids over at the Department of Labor were still working away. This time, they were busy posting the new model FMLA notices and medical certification forms. Expiration: May 31, 2018!

It’s anyone’s guess as to when new FMLA forms will be issued, so in the meantime, I’ll hold off on belting out, in true Steve Martin fashion … 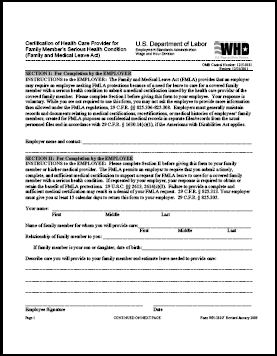 In a flurry of activity at the end of 2011, several employers contacted me to determine whether the DOL notice and certification forms still were valid, even though they contain an expiration date of December 31, 2011.  In short, employers may continue to use the DOL’s FMLA forms, although consider our suggestions below before using…

Employers frustrated with their employees’ lack of communication during FMLA leave have found a friend in the Seventh Circuit Court of Appeals.  In what must be described as a solid win for employers, the appellate court (which covers IL, IN and WI) affirmed the dismissal of a former employee’s Family and Medical Leave Act claim against the company that fired her after she failed to provide proper notice under the company’s policies for an extension of leave.  Brown v. Automotive Components Holdings, LLC, and Ford Motor Co.…

END_OF_DOCUMENT_TOKEN_TO_BE_REPLACED For employers, it pays to listen closely to the reason for which an employee requests time off, since the reason may not always be covered by the FMLA.  Kind of like occasions when the employee tells you he needs time off to clean his mother’s flooded basement.

Take Joe Lane, a medical technologist for Pontiac Osteopathic Hospital.  Joe, who lived with his mother, sought and was granted FMLA intermittent FMLA leave for six months to care for his mom, who suffered from diabetes, high blood pressure, weight loss and arthritis.  He needed leave from time to time to provide her food and transport her to doctors’ appointments, which he did without issue for the next four months.

For Joe, when it rains, it pours. Literally. Right into his mother’s basement. Joe was absent for four consecutive days and, in violation of the Hospital’s personnel policies, he failed to call in his absences. Thereafter, he informed the Hospital that he would need additional time off to clean up flooding in his mom’s basement. He claimed that the “flood cleaning days” should be excused because his mother had hepatitis and the stagnant water was a “breeding ground” for the disease. The Hospital disagreed and fired him.

At that moment, Joe’s FMLA claims went down the drain.…